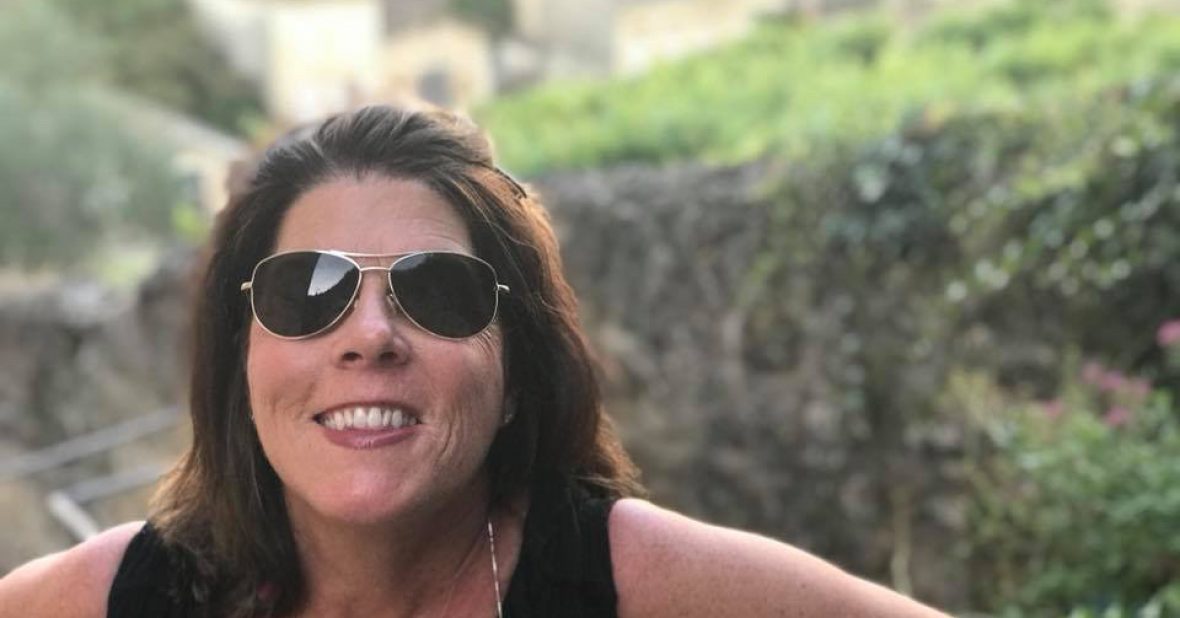 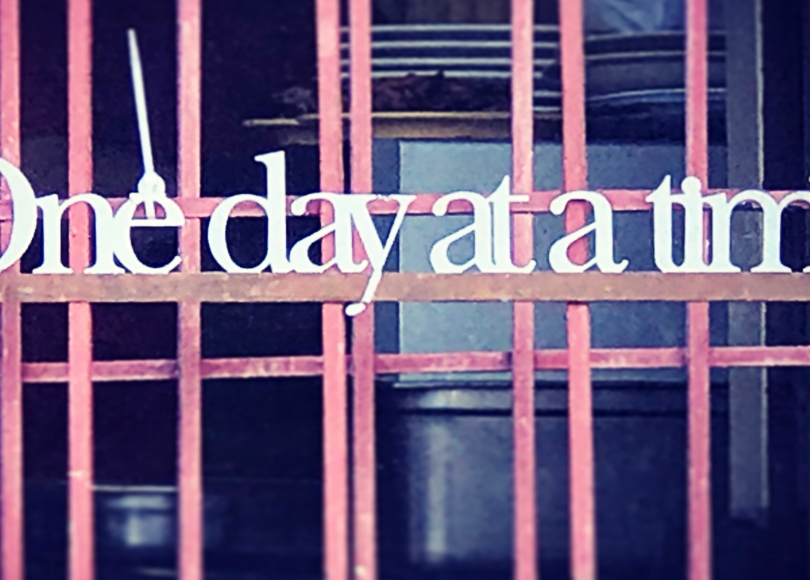 The past year we have worked hard to face life One Day At A Time.  Instead of living for that perfect summer vacation, to lose 15 pounds or talk about a game months away, we woke up, prayed and hoped for the best each day.  It sounded cliche, but it helped us get through the good times (buying a house and moving to Tampa!) and the bad times (My Man’s cancer diagnosis). 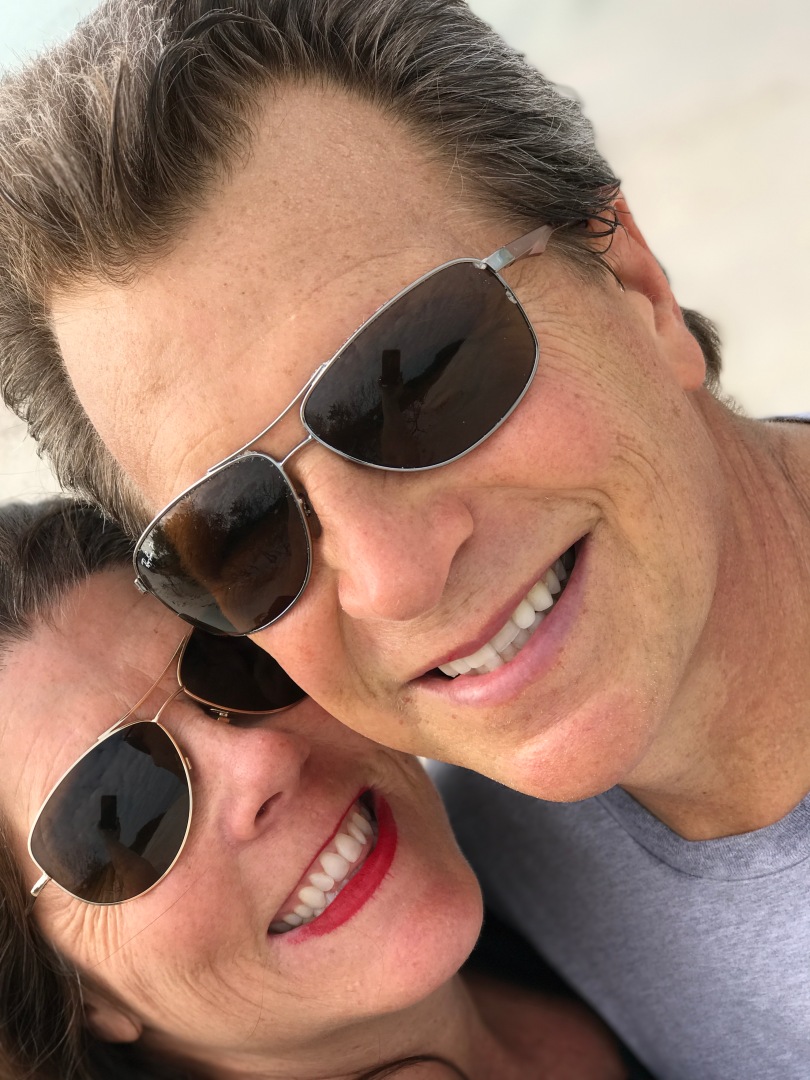 New to Tampa, we had the urge to go somewhere special, but we didn’t want to drive or fly hours to get there.  Little did we know that somewhere special was just 40 minutes down the road.  We got up early on Sunday and drove down to Clearwater Beach.  In our five years together, we found it’s not where we were, but we were with that was special!

While walking on the beach, a friend I’ve known since kindergarden called with sad news about her mom. As I hung up, I spotted a dolphin swimming along the shoreline with us.  He swam parallel to us for awhile.  The dolphin swam so peacefully just 15 feet off shore.  It really helped soothe my spirits.  It was almost like God was speaking to us through the dolphin: “Don’t worry, your mom’s friend is at peace right now.  God is holding her hand as she prepares to enter heaven.” 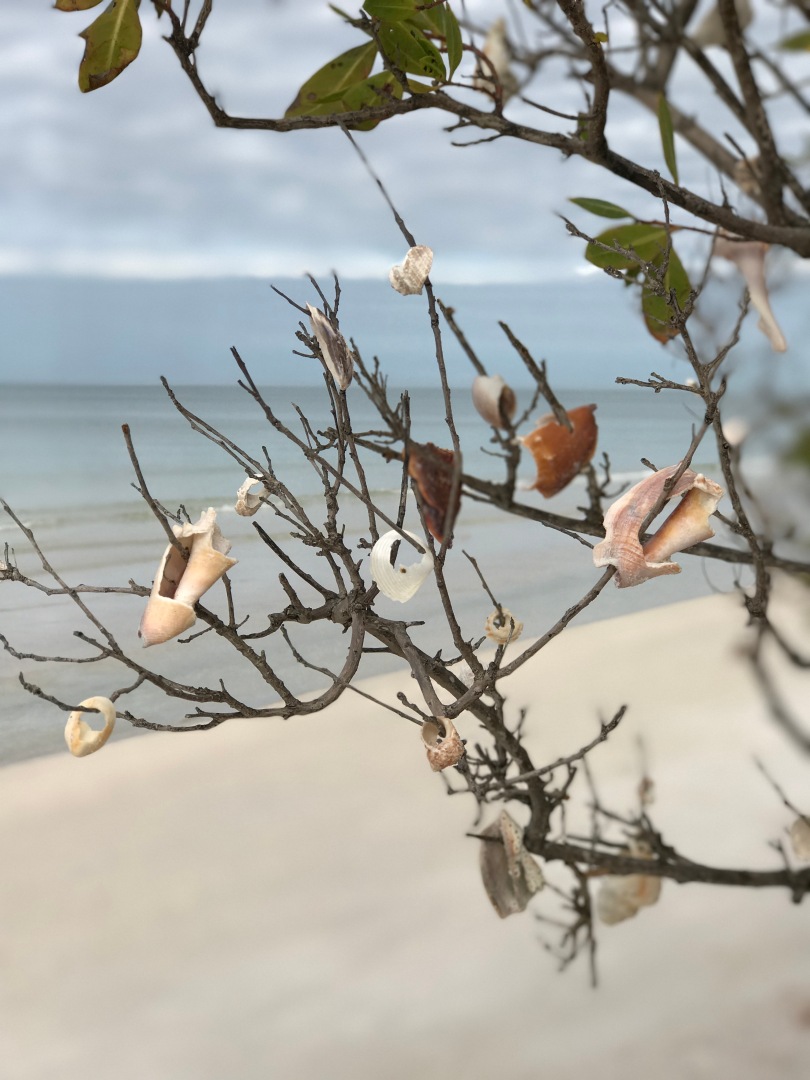 We walked a long way. Having walked at least a thousand miles on beaches in three different continents – I have never seen trees decorated with shells.  At first I thought they were blown on to the tree branches.  Laughing, My Man pointed out people had taken the time to place the shells on each branch.  It was such a simple jesture, but so creative. 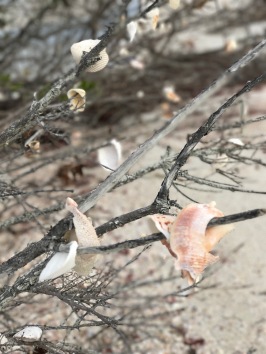 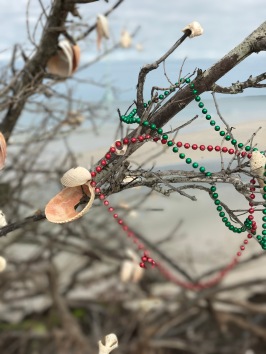 We worked to stay present on the beach, paying attention to all the small things. 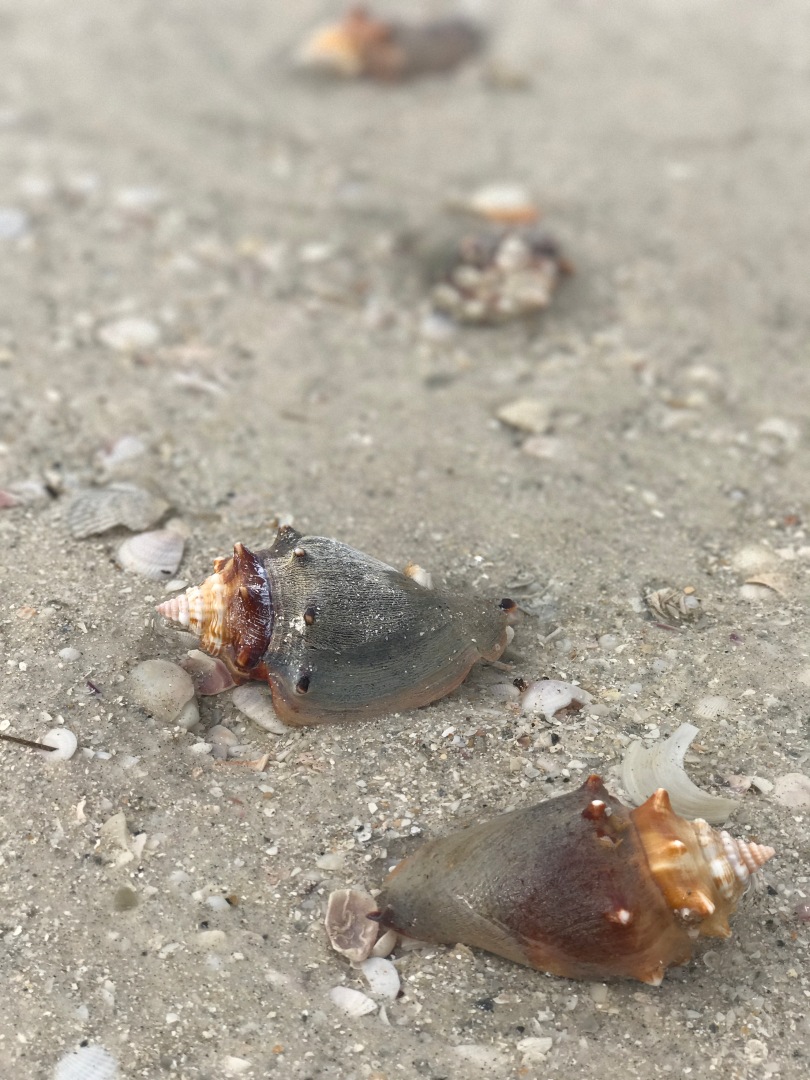 We talked the entire walk. We spent some time laughing about the first time we went to the beach as kids. I told My Man about the worst sunburn I ever got, on my 10th birthday, down at the Cardinals’ spring training.  Nick told me a funny story about his first beach trip as a 17-year-old to Ocean City, Maryland. The boys trip was highlighted by him trying to kiss a much-older woman.  She laughed and told him, “You’re a sweet kid, but you are too young for me!” 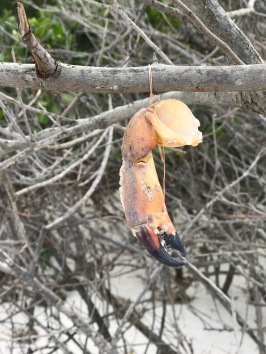 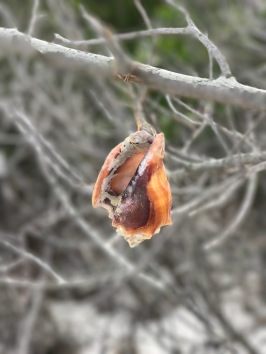 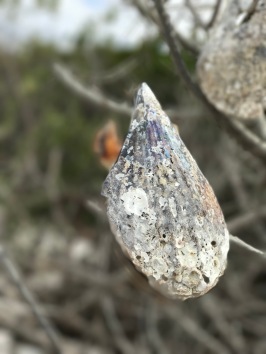 I loved this New Year’s crown that was also placed on the trees (below)! It shouted PARTY! to both of us.  In addition, it reminded us of our new year’s resolutions.  My Man’s resolution was to plan every day the night before and mine was to get in shape!  We agreed our resolutions would take a daily resolve to do the right thing. Both our resolutions were about making our daily routine less complicated.  As my friend Kim Hudson Williams recently said, “It’s about developing good habits.” 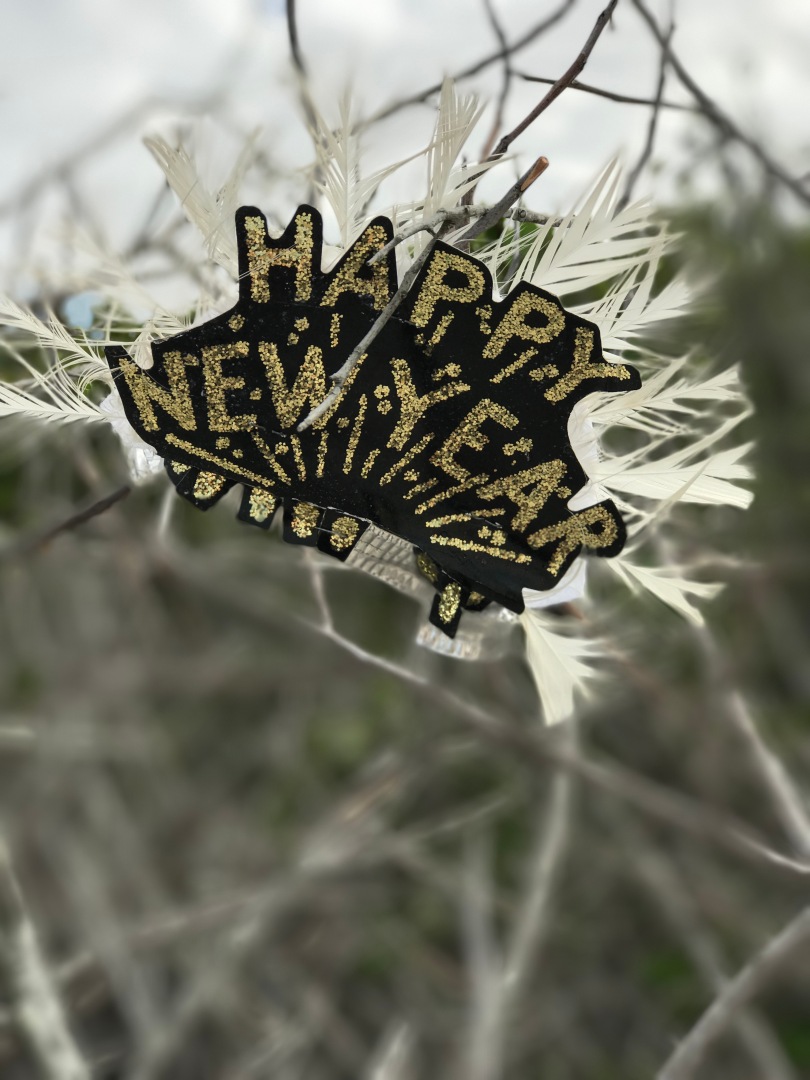 After walking on the beach for more than two hours, we headed back to the car in search of a hole-in-the wall spot for brunch.  We didn’t need to go to OpenTable to find a $$$$ place to eat, just something chill.  We found the perfect spot in Clearwater near the marina.  It Yelped out well: Nauti-Nancy’s.  When we pulled up, we had no idea what we were in for! 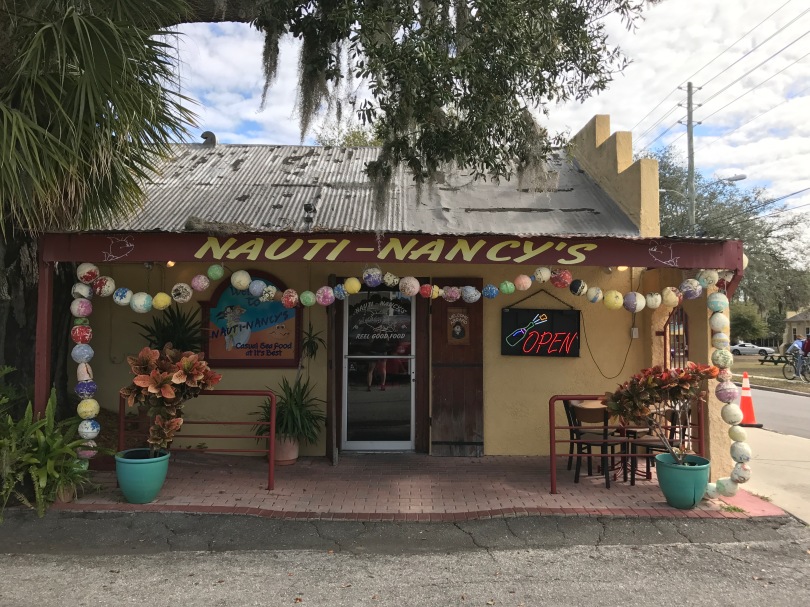 The restaurant featured indoor-outdoor seating, with live music.  In the back, there were huge tables filled with people enjoying the Florida sunshine.  There was also a senior bicycle club inside, resting after a long ride in their bright yellow t-shirts that said ‘Bay Bike Club’ on the back. 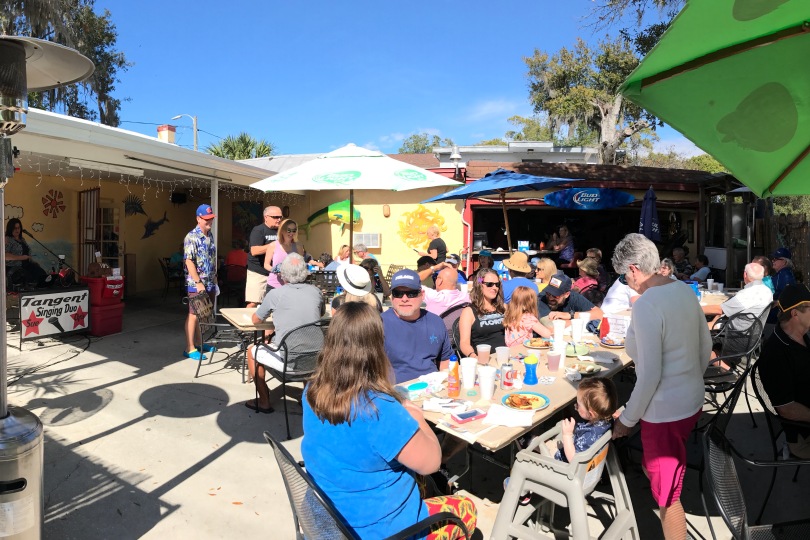 The brunch included complimentary beignet’s.  Nick liked this part a lot!  Our waitress, Debbie, gave us terrific service.  It was such a #DaysUnplanned type of restaurant with so much activity inside and out!

When we left the restaurant, I saw a sign on the kitchen door in the back and we both laughed.  A picture is worth a 1000 words isn’t it?  One Day At A Time! 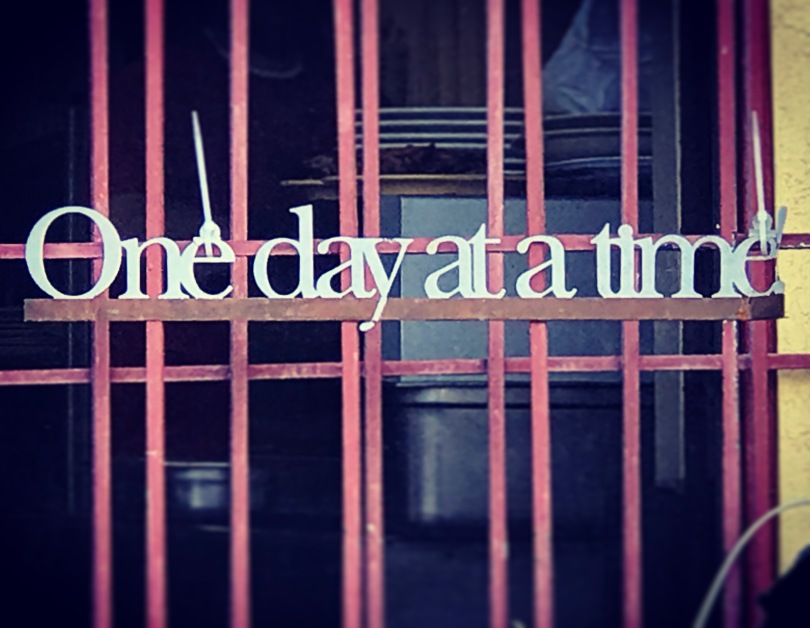